As I’m sure most of you know by now, wearing boots with a suit has not only become acceptable practice but a move favoured by those in the sartorial know. It’s a great way to add a little something extra to your look and break up the monotony that is often associated with wearing a suit. While this may seem like a bold move for a lot of men out there I can assure it isn’t. When your pants fall over the tops of your boot they often end up looking like a heavier dress shoe, something like a brogue to the uninitiated.

There are many different styles of boots out there, and I could probably go 10 deep on different boots to wear with a suit. I think it’s a much more beneficial exercise to look at three categories of boots and break down how to wear the different styles among those categories. As much as I like a heavy winter boot it’s probably not something you’re ever going to throw on with your favourite suit so it seems like a waste of everyone’s time to discuss it.

With that in mind, let’s discuss the top 10 boots to wear with a suit. Within the discussion I’ll let you know the best way to style these and the suits and fabrics that work best with a particular style of suit. At the end of the day, this isn’t rocket surgery and it’s something that should be fun. Have an open mind and you’ll see that this is a fun and interesting way to spice up your suits.

Chelsea boots are the dressiest of the three categories we’ll be discussing today, which makes them a natural pairing for a suit. Chelsea boots have also seen a resurgence in the style world recently (not that they ever really went anywhere) with them being one of Kanye’s favourite pieces. What makes a Chelsea boot work so well with a suit is that they do tend to look like a dress shoe, which is great for those looking to not shake things up too much.

There are three different styles of Chelsea boots that work well with suits, and they are as follows:

The idea of combat boots and a suit seems a bit ridiculous off the top, I know. Once you see the right pair on with a suit, however, it will change your tune. The problem with combat boots occurs when you see pairs that are adorned with all sorts of unnecessary accoutrement. If you happen to come across anything that has a strap or some piece that appears out of place, avoid them at all costs. The way you want to see combat boots is as an elevated version of the venerable favourite, Doc Marten’s. With that said, here are three styles of combat boots that are acceptable to wear with a suit (it should be noted that combat boots are best paired with heavier weight, winter suits. I highly recommend you cuff your pants as well. A cuff will provide balance to a heavier boot):

Work boots, like Chelsea boots, are easier to work with and pair with suits. I say this because now a day’s work boots are actually “work boots;” they don’t have a steel toe and they shouldn’t be worn on a job site. They’re going to be bulkier than a Chelsea boot and slightly less bulky than a combat boot, which means they’re going to work with just about any fabric and style of suit. Blending work wear and fashion is a fun way to dress and is simpler than you think. You can find works boots in all sorts of colours and styles, so here’s three that work best with a suit: 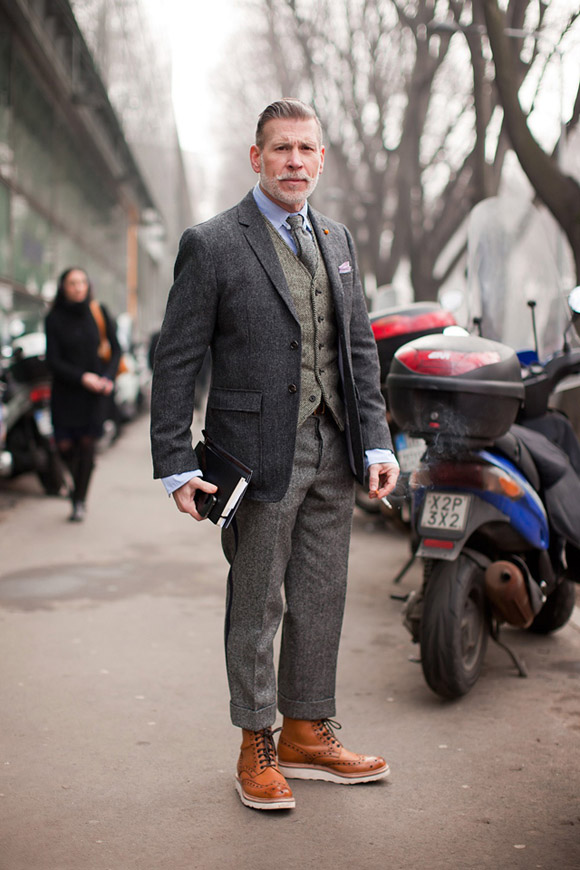 The last boot to round things out to an even 10 here is the cowboy boot. I won’t go in to too much depth here, but suffice it to say the cowboy boot and suit look is not for the faint of heart. If you have the moxie, I say go for it.

So there you have it, the top 10 boots to wear with a suit. It’s something that may seem intimidating at first but some thought and foresight should dissuade any fears. Try something simple first and work your way up. People will appreciate the effort and take note of your bold new efforts.